Indians start their day with morning tea and some even end with one! Can you imagine that Indians had not even tasted tea before mid 19th century? Well, quite unbelievable, isn't it! Today, tea is very much a part of our social lives as well. 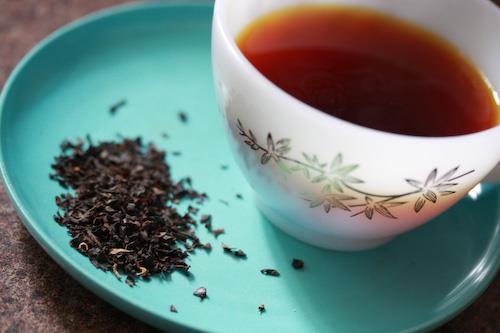 India is the world's second largest tea producer in the world - second only to China. 70% of tea is consumed within India itself! Most famous tea in India is the Assam tea and Darjeeling tea.

You know about Bihu festival and Ambubachi mela celebrated in Kamakhya temple in Guwahati. Assam is also the place where the first oil reserves were discovered in the late 19th century. But do you know that Assam is the largest tea producing state in India? Yes, Nearly 50% of the total production of tea in India is from Assam state! 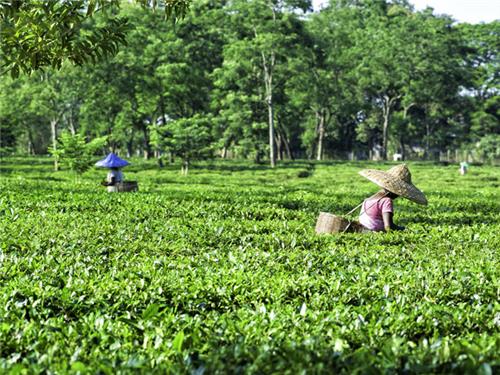 Tea is a major contributor in the economy of Assam. It is in fact an agriculture-based industry in Assam. Tea is sold through auction centre in Guwahati. Most of the tea gardens are located in Jorhat. This is why Jorhat is referred to as 'Tea Capital of the World'.

In Assam, tea is cultivated in Brahmaputra and Barak plains. 1/6th of tea produced in the world comes from Assam! Other districts in Assam where tea gardens can be found are Jorhat, Tinsukia, Dibrugarh and Golaghat. There must be at least 1,000 small and large tea plantations in Assam sprawling across 100-1000 hectares of land. Many Assamese local tribesmen also cultivate tea on small farm areas and landholdings.

Dibrugarh situated near river Brahmaputra exports the largest quantity of tea as compared to other towns. After water, it is tea which people drink most frequently. Tea also comes at cheap rates. The best quality tea is grows up high.

While harvesting, only the top two inches are plucked. These are known as 'flushes'. The tea bushes are very neatly pruned. Native tea plants are found only in Assam and South China.


How is Assam Tea Prepared

The leaves are boiled in water to prepare tea. Tea is a blend of dried leaves, buds and flowers of Camellia sinensis var. assamica (Masters) plant. This tea is cultivated near sea. You will want more of this malty and strong flavoured tea! The Assam tea is sold as 'breakfast ' teas. It owes its malty flavour to the tropical climate here.

Small quantities of green and white teas are also produced in this region, apart from this black Assam tea. In the international market, Assam tea can be distinguished by its official logo given by Tea Board of India. Assam tea is sold through Auction Centre in Guwahati.

Do you know that during growing season, a new flush grows every 7-10 days!


History of Tea in India - How Tea Reached Assam!

The English began drinking tea in early 18th century. From 1686 to 1834, the British East India Company had total monopoly over import of tea. They commenced commercial tea production during 1820s and planted Chinese variety of tea on the hills in Darjeeling.

During this time, Major Robert Bruce, in 1823, found tea plants growing in region in and around Assam. It was a different variety than Camellia sinensis plant as it made a dark and rich tea. However, he died and sometime later and his brother sent the seeds to British Government in Calcutta. The seeds were those of Camellia sinensis - a variety of tea but quite different from the Chinese variety (Camellia sinensis var. sinensis).

In 1831, Lieutenant Charlton, while on his service in Assam, sent plants to Agricultural and Horticultural Society in Calcutta observing  that people drank its infusion in Assam and on drying these leaves tasted of Chinese tea. However, his plants too were denied official recognition.

Maniram Dewan (1806-1858) was the first tea planter. It is believed that he went ahead with commercial plantation of Assam tea for the first time. The irony is that on February 26, 1858, he was hanged! He was charged for conspiracy as he took part in Sepoy Mutiny of 1857 against the British.

In 1920s, British East India Company started large scale production of a tea variety which was brewed by Singpho people. The Yandaboo treaty brought entire region under the company from Ahom kings.

Freshly prepared Assam tea will simply win your heart with its delectable aroma, full bodied and bright texture of its liquor. Tea gardens are visited by tourists to get a firsthand experience of how tea leaves are plucked and packed to our homes!

Assam tea is in fact a black tea and is famous for its strong and malty flavour. It is exported to different countries in the world. It grows in the low lying areas (lowland region) in Assam but in Nilgiris and Darjeeling, it is grown at high altitude. The area around Brahmaputra river valley is all clay with soil rich in nutrients. The climate here is cool, arid winter and hot, humid rainy season with rich loamy soil  which are all ideal for cultivation of tea! Want a strong cup of tea, choose Assam tea!

Forests once stood where there are sprawling tea gardens in Assam. They were cleared and today, there are around 850 tea estates in Assam. Plucking season for green leaves ends in October/November. Sometimes it continues till mid-December. Cropping seasons commences from March and lasts till mid December.

Tea-Pluckers in Tea Gardens of Assam 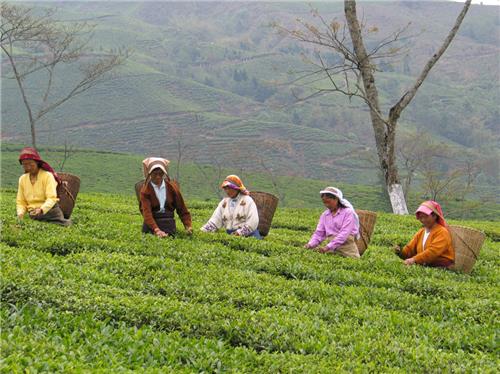 The sight of tea workers plucking tea leaves with big baskets on their back with mesmerize anyone! Tea leaves collected by them are all put into this basket. Tea-pluckers  are really deft at plucking tea leaves and pluck two leaves and a bud which is later dried and processed to be served as 'Assam tea' when you take rest from a hard day's work.

They are not very well paid but they do receive bonus and other such incentives from tea companies they work for. The 'jaapi' hat made by weaving bamboo and palm leaves looks beautiful --- truly an inspiration for any artist. They can be seen sipping tea from steel mugs during break.

Do you know that 17% of workers in Assam work for the tea industry!

Tea plantations in India are large and sprawling - growing across several acres of land - quite different from those found in China and Japan. Also plantations in Assam produce black tea which is different in colour and taste from green tea prepared in China. The leaves of Assam tea are dark green, wide and little glossy as compared to Chinese tea plant. Assam tea plant produces white blossoms and is a separate species and not another variety of Chinese tea plant. 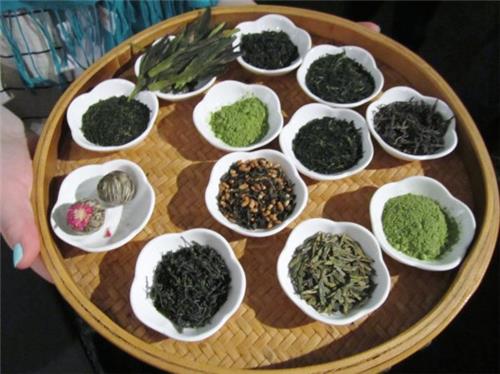 Tourism department in Assam organizes 'Tea Festival' in the month of November. This is indeed an very unique experience for tourists. they can go into dense tea plantations and see for themselves how tea leaves are patiently and very gently plucked. You get additional enjoyment of Golf and river cruises too!

Well, do not miss this opportunity to also visit the GTAC - Guwahati Tea Auction Centre which is the largest of its kind in India! Established in 1970, this centre takes care of marketing of tea produced in Assam. In terms of tea, it is the world's second largest tea auction centre. Imagine, this centre auctions tea of value around 550 crore annually!

Well, there are about 2500 tea gardens in Assam and these cover acres of land. Tourists visit these tea gardens to experience greenery, peace and serenity. These can be seen on both sides of the road. Enjoy nature Walk and rejuvenate yourself amidst green aromatic tea bushes.

The tea industry in Assam wants a total overhauling of the present system of tea e-auction system. Although this system has got rid of manual system of auction but is not ideal for fair price discovery. Every auction centre runs auction as per their whims, sale dates and payment dates are deferred, parallel system of 'private mode' takes place along with 'auction mode' which is  in violation of Tea Marketing Control Order (TMCO) 2003.

So, the tea industry has demanded a pan-India e-auction system for tea. They have also demanded building of another tea-auction centre in Jorhat (Upper Assam). An electronic platform is also required in addition to the e-auction system.

Well, Assam tea shines amidst many challenges. Let us delve into a few of them:

Have you heard about 'Bagan' time or Tea Garden Time? Well, tea gardens in Assam do not follow Indian Standard Time (IST) followed all over India and Sri Lanka. Bagan time is 1 hour ahead of the IST. This system was introduced by the British as sun rises early here! Well, it has aided in increased productivity and tea labourers are able to finish their work during daytime too.

Film Maker Jahnu Barua has stressed the need for a separate time zone for entire North-East region. However, the government does not intend to divide India on the basis of multiple time zones. However, Plantations Labour Act, 1951 allows Central and State governments to define as well as set the Local Time for any specific industrial zone.

Tea Board of India is concentrating to evolve the quality rather than quantity of Assam tea. Small tea growers are being wooed to grow good quality leaves. Tea Board of India also caters with certification, tea production, export and other such realms of tea trade.

Assam tea enjoys geographical protection due to global patenting. It has been registered with Geographical Indication (GI) certification.

In 1911, Tea Research Centre commenced functioning in Toklai (Jorhat). The aim of this centre is development of scientific methods of cultivation of tea plants which involves soil cultivation, fertilizers, soil testing and processing of tea leaves. In 1974, instant tea project became successful in Tea Research Centre here. Instant tea is powdered so that it mixes easily in hot/cold water.

Do you know that Tea Research Centre in Toklai (Jorhat) is the oldest and also the largest centre in the world!

Well, we do not know if every hero sipping tea has Assam tea in his cup! However, in the 1970s, a Bengali film directed by Tapan Sinha dealt with labour rights of tea workers during British rule.

In short, Assam tea is going places - through post, in the form of tea coin and of course, to your heart by its strong flavour!Yes, visit Assam - the 'land of one-horned rhino' and sip in the beauty of nature and rich aroma of Assam tea.