Come January and the whole of Assam is engulfed in Magh Bihu festivities. With the making of delicious traditional delicacies like 'pitha and laru" to feasting in the 'mejis' it is the most awaited time of the year for the Assamese people. Magh bihu is also called Bhogali Bihu and is a harvest festival celebrated with much fanfare in Assam. The festival marks the end of harvesting season in the month of Maagha ie January - February. The feasting celebration starts the first day of 'Magh' month of Assamese calendar and lasts for a week. 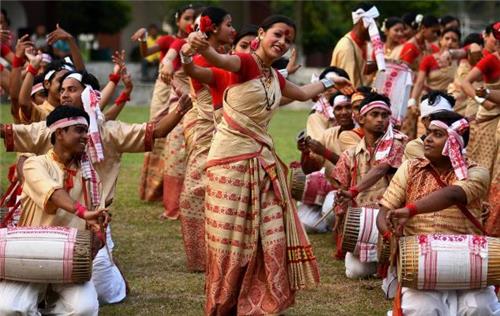 Magh Bihu celebrations start on the last day of the previous month ie the month of "Pooh" which is usually the 29th of Pooh and usually the 14th of January. Earlier the festival would last for the whole month of Magh and so the name Magh Bihu.

The night before the actual bihu is called "Uruka" (28th of Pooh), the last day of Pausa, when people gather around a bonfire, cook dinner and make merriment. Young people, all across Assam, erect makeshift huts known as 'meji' or 'Bhelaghar' from bamboo leaves and thatch. People eat the feast food in the "meji" and burn the huts the next morning.

On the actual day of Magh Bihu everyone takes bath at the dawn itself and proceed to the meji. The Meji is then lit up by one old member of the society. All the villagers gather around the Meji and complete many rituals like worshiping the meji with various types edibles like coconut, betel nut etc. Various types items like potatoes, sweet potato, muwa aloo, etc are roasted in the large fire of the meji and everyone later eat it. Magh Bihu is celebrated at a season when winter is about to go and it is believed that the fire of Meji burns the winter out. Youths also enjoy with cracker like thing made of bamboo called 'Hiloi'. 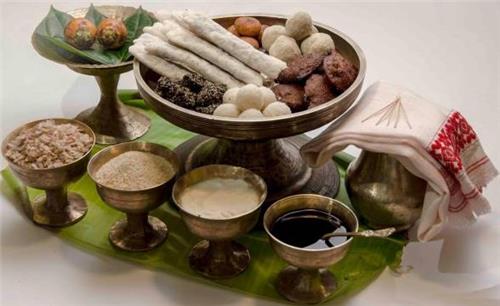 Bhogali Bihu comes from the word 'Bhog' that is eating and enjoyment. Since this Bihu is a harvest festival and the granaries are full so there is a lot of feasting and eating during this period. There is community feasting everywhere in Assam during magh bihu. Bhogali Bihu basically represents a festival of food. There is also exchange of sweets and greetings at this time. Ladies of the society prepare for this Bihu for many days. They cook various snacks, sweets and dishes for this grand day. Various types of Jolpan and pitha are served to everyone like Ghila Pitha, Til Pitha, sunga pitha, Til Laru, narikol laru, sira, muri doi. People also have traditional food and cuisine like bora saul bhat, fish pitika, bengena khar, masor tenga, omita khar and so on. 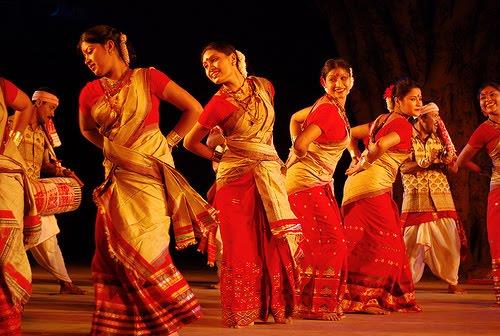 Bihu cannot be complete without the famous Bihu dance. People of Assam are always ready to shake a leg of the Bihu dance and so during Magh Bihu men and women are seen dancing to the tune of the 'dhul' and 'pepa' either at their homes or at the fields.

With feasting and celebration magh bihu is the grand occasion of joyful event signifying the end of the rice harvesting season and thanksgiving to the almighty.