* In case of any delay in receiving the OTP, you may verify it later. Please proceed without verification.

Assam is a beautiful state of northeastern India. Tucked in the southern part of the eastern Himalayas and flanked by the mighty Brahmaputra river, the state has many temples, mosques and other religious spots in different towns and cities of the state. Being home to different religions, cultures and beliefs of people, Assam has many religious places located across the state.

There are also many Satras and monasteries in Assam built by Vaishnavite Saint Mahapurush Shrimanta Sankardeva and his followers.

There are also many gurudwaras like the Sri Teg Bahadur Gurudwara and mosques like Poa Mecca located in Assam.

Assam, spread along the Brahmaputra river, is also called the city of temples because of the existence of ancient temples here. Temples in Assam date back to the ancient times. The state has temples belonging to Shaktism, Shivaism and Vaishnavism. The Kamakhya temple located here is one of the Shaktipeeths of India. Sukreshwar and Shivadl are finest examples of Shivaism and the numerable namghar and sattras in Assam are the specimens of vaishnavism flourishing here in the state. 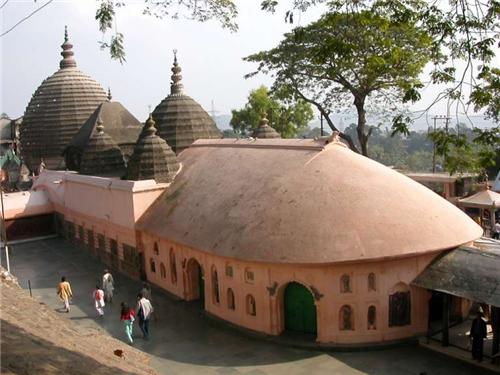 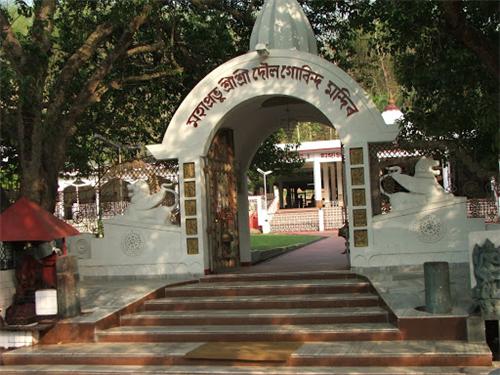 Situated on the banks of Brahmaputra river, Doul Govinda temple is one of the most revered shrines of lord Krishna. The Doul govinda temple is known to possess immense scenic beauty. 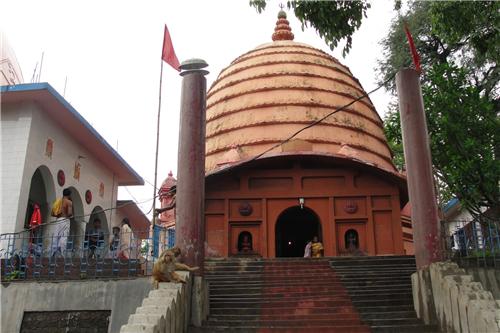 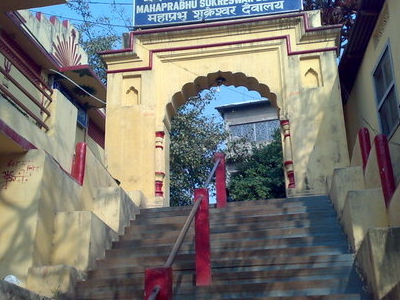 Situated on the Sukreshwar or Itakhuli hill in Guwahati, Sukreshwar temple is a famous Shiva temple. The temple is located on the banks of the Brahmaputra  and provides a picturesque view of the mighty river. 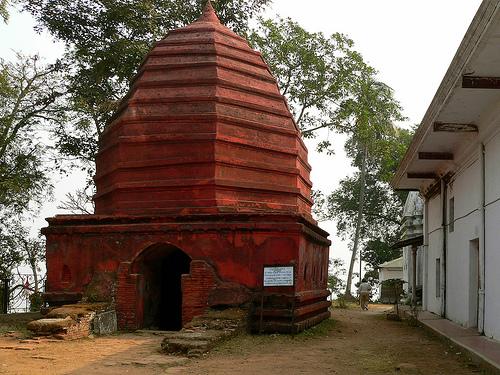 Situated on the Peacock island in the middle of the Brahmaputra in Guwahati, Umananda temple is a great Shiva temple in Assam. Located on Bhasmacala mountain, Umananda attracts devotees from all over the country during Shiva Ratri. Regular ferry services are available to this place. 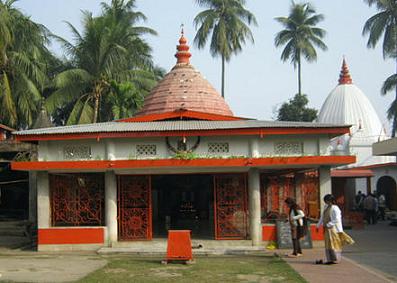 Located in the eastern part of the Guwahati city, the Ugratara temple is a Devi temple in Assam. The temple is an important Shakti shrine related to Sati, the consort of lord Shiva. 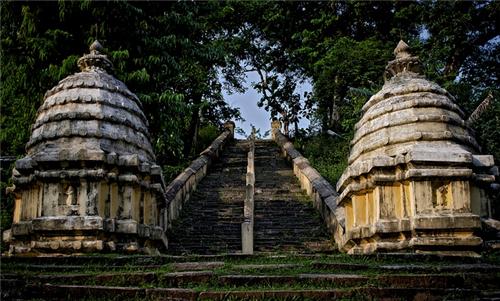 Situated on the banks of Brahmaputra river, Ashwaklanta temple is a temple dedicated to lord Vishnu. During Janmashtami and Ashokashtami the temple is thronged by a number of devotees. 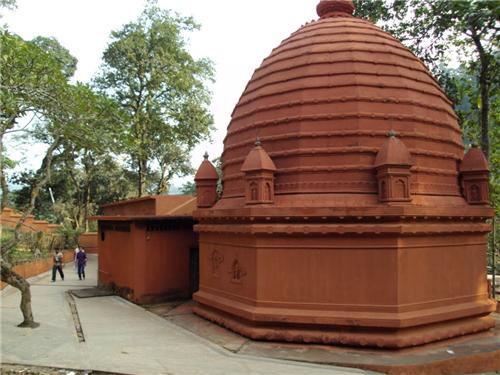 Situated on the Sandhyachal hill, Basistha temple is the temple of vedic Sage Bashistha. The sage is said to have lived here. The rivulets Sandhya, Kanta and Lalita meet here and flow perennially which add to the scenic grandeur of the place. 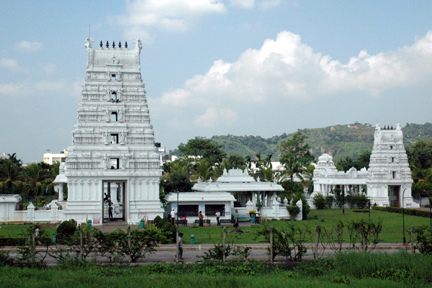 Balaji temple is another most important temple in Assam. Situated in Guwahati, the Balaji temple is dedicated to lord Balaji and the structure of the temple is made in the same style of that of the South. 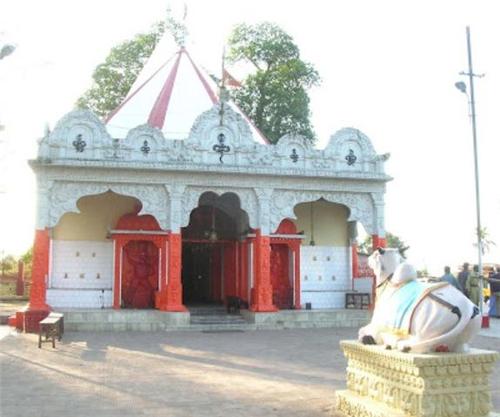 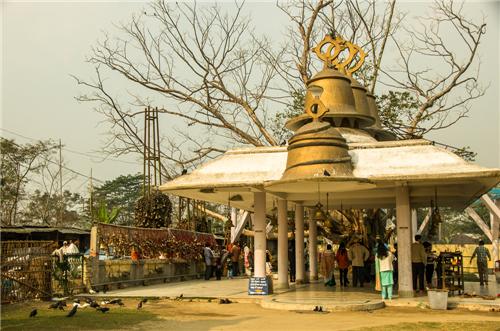 Tilinga mandir is a famous Siva Temple in Tinsukia District of Assam. Tilinga means "bell" and mandir means "temple". There are hundreds and thousands of bells of all sizes tied to the big peepal tree and on its various branches in the temple. 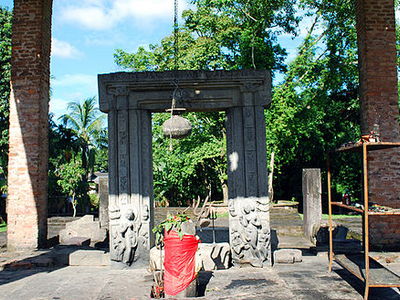 Located in Tezpur, Da-parbatia is a finest and oldest specimen of sculptural or iconoclastic art in Assam. The architecture of the temple is a marvelous one. The door-jambs have two goddesses-- Ganga and Yamuna standing below with garlands in their hands in artistic pose and elegance. 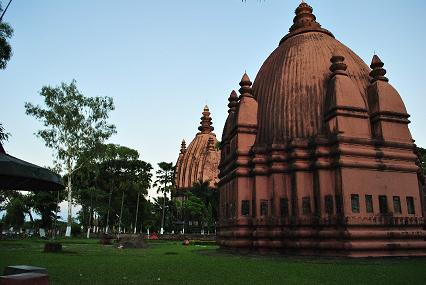 Situated in Sibsagar, Devi dol is a temple dedicated to the goddess of power Devi Durga. Shakti puja is celebrated in the temple and people from all over the country come here to offer prayers. 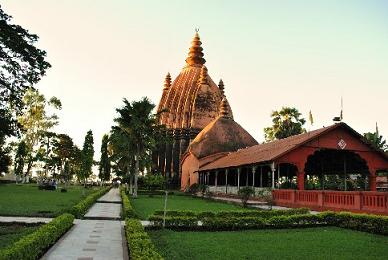 Shiva Dol is a temple situated on the bank of the Sibsagar tank. Shiva dol is an important place of Shivaism in Assam. 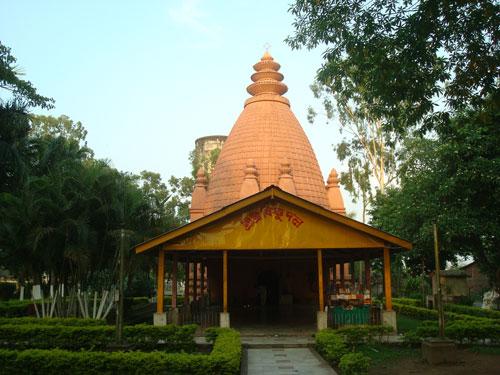 Vishnu Dol is a temple situated in Sibsagar, Assam. Vishnu dol is an important place of Vishnu worship in Assam. 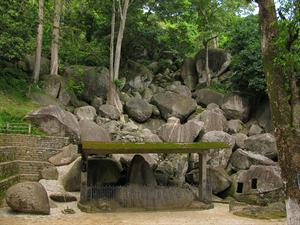 Surya Pahar Temple is an old temple situated in Golpara, Assam. This temple enshrines a circular stone tablet having 12 images of Aditya in a circle with an image of Kashyapa, the father of Aditya in the center. 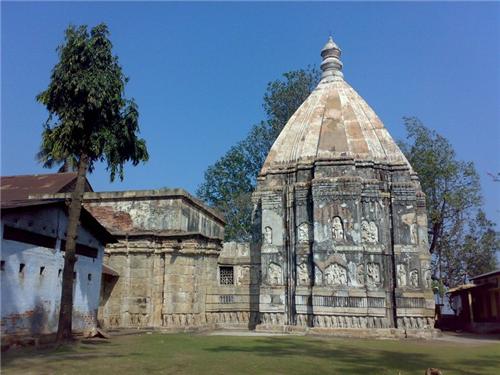 Assam is a place where pilgrimage is one of the most pacifying and leveling experiences. Assam is home to many important and sacred mosques which are considered supreme pilgrimage centres. Mosques in Assam date back to thousand of years and are architecturally most beautiful and wonderful. Let us discover more about mosques in Assam. 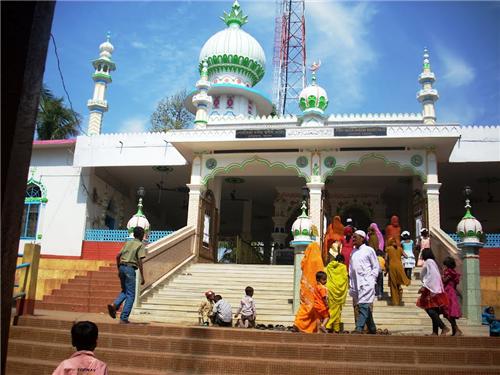 Located at Hajo, near Guwahati, Poa Mecca is a supreme place of pilgrimage for the Muslims. Poa Mecca has the tomb of the seer Giasuddin Auliya. This is the most famous Dargah of the Mohmmedan people of North-East India. There is a belief about the mecca that Peer Aulia Giasuddin Sahab brought ‘one poa' of land from the Holy city of Mecca and established a Masjid on the hill Garudachala. Hence, from there the name of the mecca became Poa Mecca. According to another belief when Giasuddin Aulia established the  mosque at Garudachala hills there were the excavation of 90 Shrines – one fourth of Mecca. And from this one fourth of Mecca the name Poa Mecca evolved. It is widely believed that by offering prayers in the mecca the faithful gain one fourth of the spiritual enlightenment of what could be gained at Mecca. The Uruch festival is celebrated with enthusiasm in the Poa Mecca. 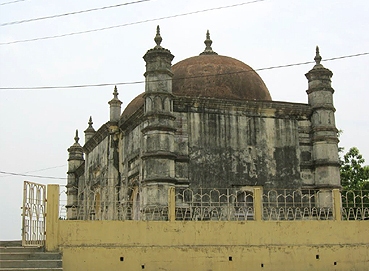 The Panbari Masjid or Rangamati Masjid is considered to be the oldest mosque of Assam. The mosque was built in 15th century by Hussain Shah, the then Governor of Bengal. An Idgah and a deep well was constructed during that time. The mosque was used as a prayer hall by the Mughal Mohammedan Soldiers. Known as a holy seat of Muslims, the masjid is visited by thousands of people from different parts of India, especially during Id. 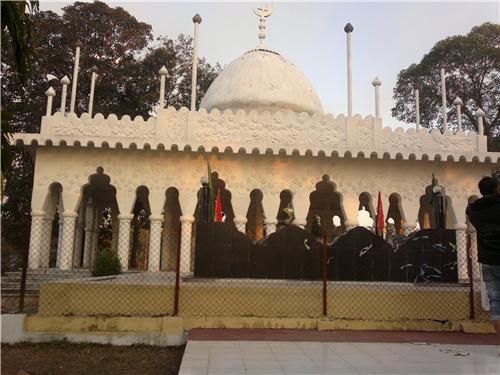 Situated in Sibsagar District, on the bank of the Brahmaputra river, Dargah of Ajan Pir is the Samadhi of legendary Muslim Saint Shah Milan, also known as Ajan Pir. Ajan Pir was a famous saint of Assam who led a Muslim reform movement in the state. The Dargah of Ajan Pir is a revered destination for both Muslims and Hindus. 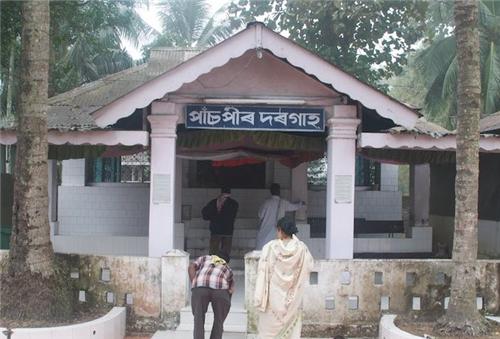 Namghar is a place of worship of the Assamese community. Naamghor can be found in almost all the Hindu villages of Assam. Namghar is a kind of an identity for the Assamese people. It is the primary feature of every village, town and city of Assam. 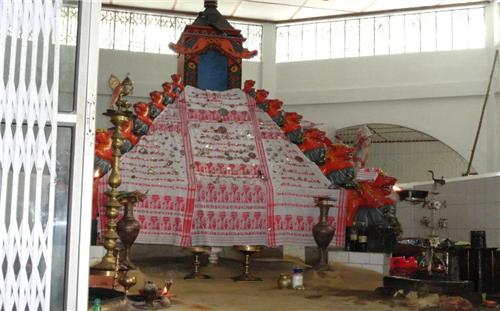 Naamghor: “Naam” meaning prayer and “ghor” meaning house. So literally, Naamghor means house for prayers. Naamghor is the place where the Vaishnavite Hindus of Assam do their recitations and pay their tribute to saint Sankardeva. The worship is associated with the Ekasarana religion of Assam. 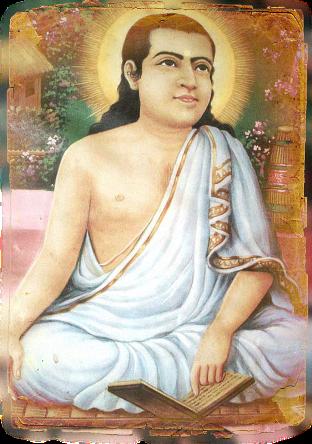 Long back in the 15th century, Naamghor was introduced to the Assamese community by the Vaishnavite saint Srimanta Sankardeva (1449-1569). During the Middle ages, he was the first reformer in the state of Assam.   It is believed that the first Namghor was established by the side of the river Borholla, near Golaghat by Mahapurukh Madhavdev and his disciples. Historical references of the religious Namghor have been found during the reign of King Gadapani who was an Ahom king. It is also believed that Gadapani who was later known as Gadadhar Singha, donated 8 bigha land and 160 coins which is equal to 8 kuris to the naamghor due to which it is today known as the ‘Athkuria’ (‘ath’ means eight and ‘kuri’ means twenty). The first Manikut on the other hand was created by Srimanta Sankardeva at Dhuwahat, where an idol was housed and established. 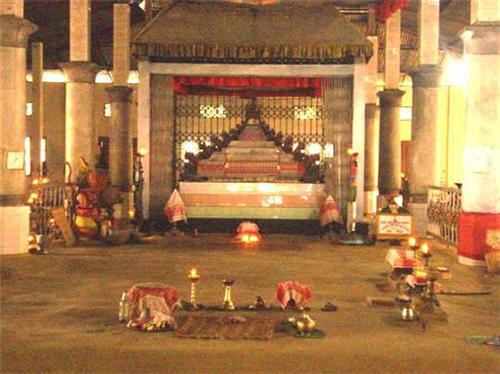 A Naamghor primarily consists of two spaces, one is the Monikut and the other is the assembly space. The principal axis of the Naamghor is always directed towards the east-west. Xinxahon or the throne is place in the east of the Naamghor facing the west. Devotees have to sit facing the xinxahon towards the west. The monikut on the other is the one that shelters the Xinxahon or thapana. The devotees sit in the assembly space and there they sing and pay homage to the great saint Srimanata Sankardeva.

The Monikut is the space which is very small in structure and either has no windows or very little ones. This place is a private place where no one but only the Xotradhikar can make his entry. Another important element of the naamghor is the ghaai khuta (main pillar), which is a standing column in the assembly hall, but it is oversized. The floor around this pillar is slightly raised up and it can be usually recognized by the Gamosa that is tied around it. Only the burha-dangoria is allowed to sit near the ghaai khuta, since it is considered to be his honorable seat. 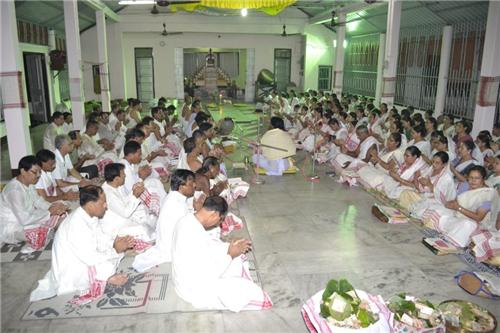 Unlike temples and other religious places, the naamghor is not for daily use, but it is primarily used in order to assemblage the people for special events and other memorial services. The spiritual leader of the community is known as the Xotradhikaar, who is in charge of the entire Naamghor and the rituals and practices related along with it. Naamghor is also used for theatrical performances which are a part of the tradition of the Assamese community known as bhawna. The public Naamghor is made very spacious and airy, in order to be able to accommodate the huge number of people coming to visit the Naamghor.

Naamghors generally do not have the type of food service that one gets in temples and other religious places. The only after food consumed after services in Naamghors is the 'maah-saul' or fruit and soaked green lentils, which are offered to the monikut as well. The ones who distribute and serve the food in the Naamghor are called deus or deuris. This position as deu and deuris is also a very reputed and honorable position for the one holding it. And this is the reason that there never was or never have been in pantries or kitchens associated with Naamghors till date.

There are Namghars in all the Hindu villages in Assam. In Nagaon district, Assam, there are several public Namghors in every village. Infact the first Naamghar was established at Bordowa in Nagaon district. The town of Barpeta also has many Namghars located here. An ancient Namghor called the Kirton Ghor is located here. 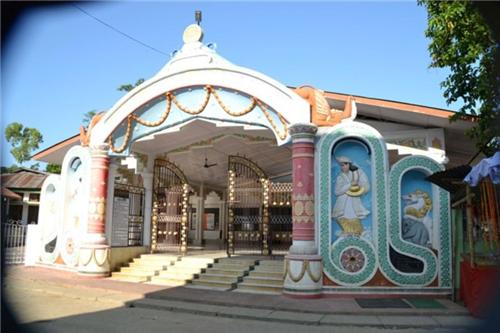 Dhekiakhowa Barnamghar is a famous Namghar situated at Jorhat in Assam. The Namghar plays an important role in spreading Vaishnava dharma. The Barnamghar is one of the important religious spots and popular tourist destinations in Jorhat. 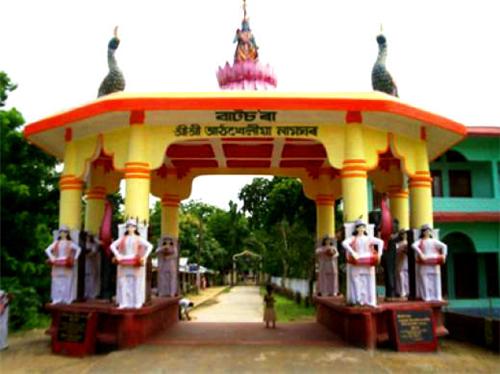